The Kogis, the guardians of the mother earth at the service of the planet.

Because I believe that if we all unite under one roof, in respect, with the same values, if we all start to spread our love and beauty, and offer the world our talents and gifts, we'll have an immense impact on human kind and our whole planet!... Because our world IS love, so let's BE love... like an avalanche.
• November 21, 2017November 21, 2017 • Photo: Eric Julien 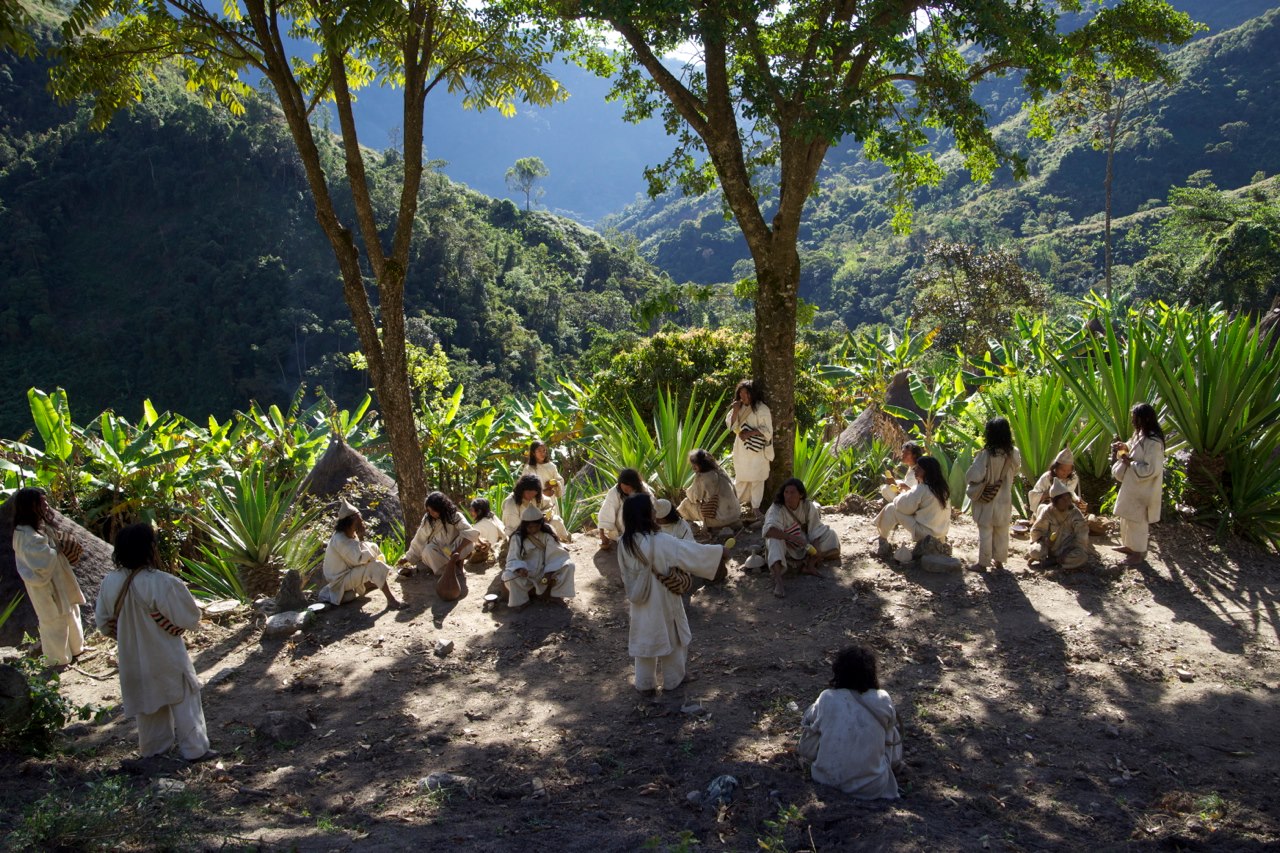 We did not know them until our meeting in Brasilia, where a group of 40 leaders of the first people from all over the world came together to create together ‘The Guardian Alliance of Mother Earth’.

We were very touched by the two representatives of their people, dressed all in white, with their multi-colored striped bags, always a little set back from the assembly, discreet and still very present.

We learned that the chiefs spend their first 18 years in caves, to connect deeply with the mother earth, to hear her needs, to hear her message. And that they never work for themselves, but always for the community. They call us our little brothers, and they do not condemn us for what we do to Mother Earth. They understood that we ‘do not know’. Seeing them, we do not feel any duality coming from them, even when their plantations are destroyed by a government helicopter for that they can plant coca afterwards, they seem stupefied, but do not condemn, because they know that we are all one, and that by condemning others, they condemn themselves!

When one of them sets himself apart because he is sad, the others will pick him up. When one does not have enough, they always share everything equally. They live an exceptional fraternity, exemplary. An extraordinary wisdom. They could not be more inspiring. They deeply touched me.

We took some notes of their movie, ‘Kogis, the message of the last humans’. A masterpiece. They say among others, translated and filmed by Eric Julien:

« There is one law for everyone. Whites, blacks, reds, yellows, everyone has a part to keep balance in nature. For now, the exchange between us is difficult, but if tomorrow we use our thought a little better, we could talk … there is no time to speak, but to act. The collective goes before the individual. Aluna – the thought, the soul, the human body is not only matter, there is also something else, it’s what goes on after death. We do very beautiful things, but we don’t have elders anymore to transmit to us » and it seems to them that we know nothing. « The little brothers took everything away. Then everything has its opposite.

When there is balance, there is strength, energy. We can not balance things when we do not know where our raw material is. Now that we know it, in museums and so on (talking of gold), we can.

When we return home after being in a big city we must purify ourselves first. Eat nothing for days. Then we have to sing. Like the sacred birds that transmit with their songs their melodies further. The Sierra Nevada ranges from 0-6000 meters, all climates are present, it is one of the most precious biodiversity on the planet. We are pushed back to the mountains. Somebody wishes to eliminate us to plant coca. Can we agree to commit genocide? It’s today ! The government kills fish, rivers, kills everything. We have come here to Paris to find out what we can do to save them. We need to reweave the feathers to start something again … to protect life, the Sierra, we must think and do things together, alone, we can not succeed. Does the little brother understand that? For all of us to be brothers. »

The Kogi Indians live in the Sierra Nevada of Santa Marta, Colombia, for more than half a millennium. The Tayronas, their ancestors (who were massacred by the conquistadores), preceded them for 3,500 years … In their community, they give the same importance to each individual, because there is no hierarchy between them. Thus, for example, the one who sews is considered as important as the one who cultivates, etc. … All decisions are made after everyone has spoken and this is as much for the child as for the old man. This is why Kogis can take a lot of time to make a decision that does not hurt anyone. Their traditions are characterized by a very strong relationship to the Earth. Nowadays, they still feel they are guardians of the Earth they consider  ‘sacred’. They are, among other things, able to recognize the places where the Earth is « alive » and those where it is « dead » … Eric Julien