I chose to be an Ambassador of 7sky.life because I strongly believe that sharing positive values and initiatives is a catalyst bringing joy into our lives and uplifting the human being. Through my photos and stories connected with riding, mountains, nature, art, ecology, I want to show the incredible beauty of this world and its people that is flowing through my eyes and soul. Yes, beauty is in the eye of the beholder. Legendary writer Nicolas Bouvier put in a few words one of the most beautiful definitions of life: 'Like water, the world is flowing through you and lends you its colors for a while.'
• March 14, 2017March 14, 2017 • 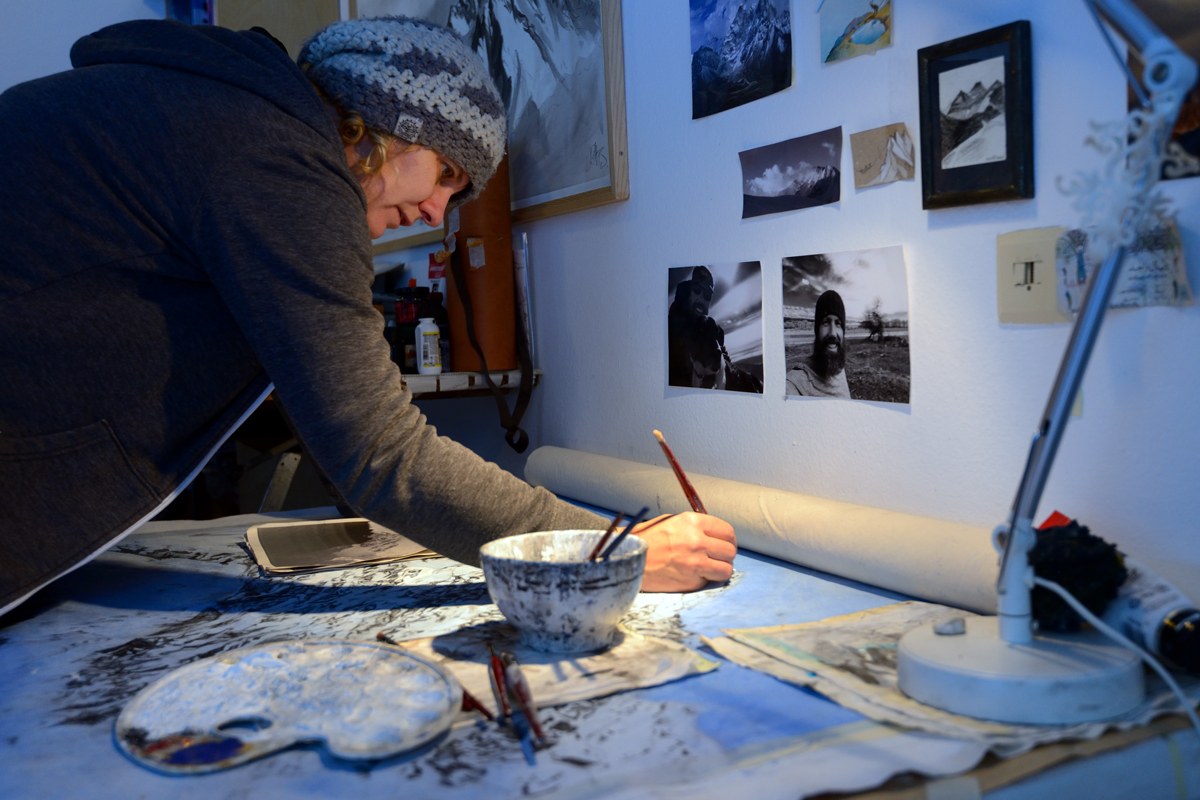 ‘Time flows on. And we have dreams that follow us.

They start somewhere unknown. Does there always have to be a beginning?

I float through life on the boundary between reality and my reality. How do I describe my reality?

I am overwhelmed by all that I see… a touch of light here… a detail there… a mood, a feeling.

These beautiful lines truthfully sum up the intriguing personality and work of artist Jessie Pitt. Our first encounter takes place one afternoon in her home mountains of Ötztal in Austria during the shortest days of the year. The valley leading to Sölden remains fairly unspoilt with its quaint traditional houses and green pastures. We are in early December and winter has not spread its deep white blanket yet. The plan to share some lines together fades away as Mother Nature simply decided otherwise. Instead, we go for a hike to explore her surroundings, the area of the majestic Wildspitze, the highest peak of the Ötztal mountains. Strolling along an icy river bed, I quickly sense a very delicate contemplative energy emanating from her. Every detail, sound and subtle change of light seem to penetrate her whole being and become a constant source of inspiration.

‘Time does tell us to appreciate the past. And the past is a pathway to the now and the beginning of the future.

The beginning started with a bang and never stopped since. I feel like I already saw a lifetime of things before I turned eighteen. Growing up with a father who was amazed at life, the world, nature, history, art… but honestly how can you put life in a list?

I grew up in a world of amazement and appreciation flowing along in all the adventures that Dad and Mum took Emma and I upon. So how can that not leave impressions on your soul?’

Family ties. This fundamental notion lies at the core of her soul. Jessie has vivid memories of her early childhood and experiences in nature. Her parents used to take her and her sister Emma to countless family road trips among Australia’s lush wilderness. One of them undoubtedly stands out in her mind. When she was ten, they went on a hike in Tasmania along the Southwest cape with her family and two friends of her Dad. They had to be flown in by a light aircraft to Meleleuca, a small airstrip in the bush. When they first arrived, they had to turn back because of a storm. But the second time worked. From there, they walked during twelve days and eleven nights along the coast to Cockles Creek. They saw only three people over the whole time. It was simply surreal: amazing wilderness and experiences, from being soaked by torrential rain walking up a mountain called the Ironbounds to crossing rivers on logs… ‘From then on, it has remained deeply engraved within me all my life. This milestone in my existence is a huge example of what we did as a family and the adventures we had.’

‘The mountains are me.

They give me breath & breathe through me.

When they start, I end.

That exist as one.’

An English Dad. An Australian mother. Numerous travels back and forth between Oz and the Old Continent, stopping in different places along the way. As a kid, Jessie would draw in the back of the family car during roadtrips. It gradually became a constant in her life. The last two years in high school, she mostly chose art-related subjects she devoted herself to and later studied photography, sculpture, drawing, print-making… ‘But I don’t really have a point in time when I knew I was going to be an artist.’ She went with the flow of her own life and it just happened organically. ‘I find that the natural beauty of our planet offers limitless motivation and material to draw. Art is way more complex than just being something pretty. I like art that makes you feel something, art that visually creates a feeling of emotion.’ She names American legendary photographer Ansel Adams as one of her great influences with his stunning mastery of light.

‘I often find myself not drawing mountains… but light and shadow that become mountains when I stand back.’

Mountains and nature are fascinating, with constantly changing light and mood. They represent to her an everyday source of inspiration which she strives to communicate through her art. Having lived many years in the mountains of Australia and Europe, it has become as a natural result the central theme in her art. ‘I am a painter of light, shadow and mood.’ Jessie uses different mediums, generally not focusing on just one, but mixing them together to get the effects she seeks: compressed and willow charcoal, pastel, acrylic paint, pencil, Indian ink and oil… She draws and paints on paper and canvas predominantly, often using her own photos as a reference. Her drawings seem to come more into focus from a distance: she enjoys working on large formats, which are in a way a more faithful representation of the scale of the mountains, yet paying a lot of attention to details. Since a couple of years now, she has stopped using frames when exhibiting her work in Austria or abroad. ‘I do not feel the need to have the piece of art perfectly presented in a traditional way and have a preference for a certain sense of rawness.’

‘I can look at the same mountain all winter when I’m guiding, and it is always changing or something different.’

Skiing. The driving force in her existence together with art. Sketching lines on mountains with her own skis. The essence of riding is in itself nothing but another form of art. Jessie used to ski a lot with her parents then spent many years doing back-to-back winters between Australia and Europe. Riding has always been a way to be strongly connected with the mountains around her. Willing to push things further into that direction, she started to take a ski instructor degree in Australia and completed the full certification in Austria. She has been calling the mountains of Tirol her second home since a few years now and works as a freeride guide in the winter. ‘It is a lot of responsibility but also a great job, meeting many interesting people from all over the world, many of whom stay in touch. It connects to my art in the sense of the environment I am in every day. It offers me a lot of inspiration for my artwork. Enjoying the stillness of the mountains and their constantly changing light and mood, this is something that I experience guiding.’

Artist, poet, backcountry ski guide, nature lover: all these things combined together define who Jessie Pitt deeply is. Exploring and enjoying in her daily existence the full potential of life, she is an artist who paints with her soul and heart wide open.

The mountaineer Ilina Arsova - a subtle mix of strength and serenity. 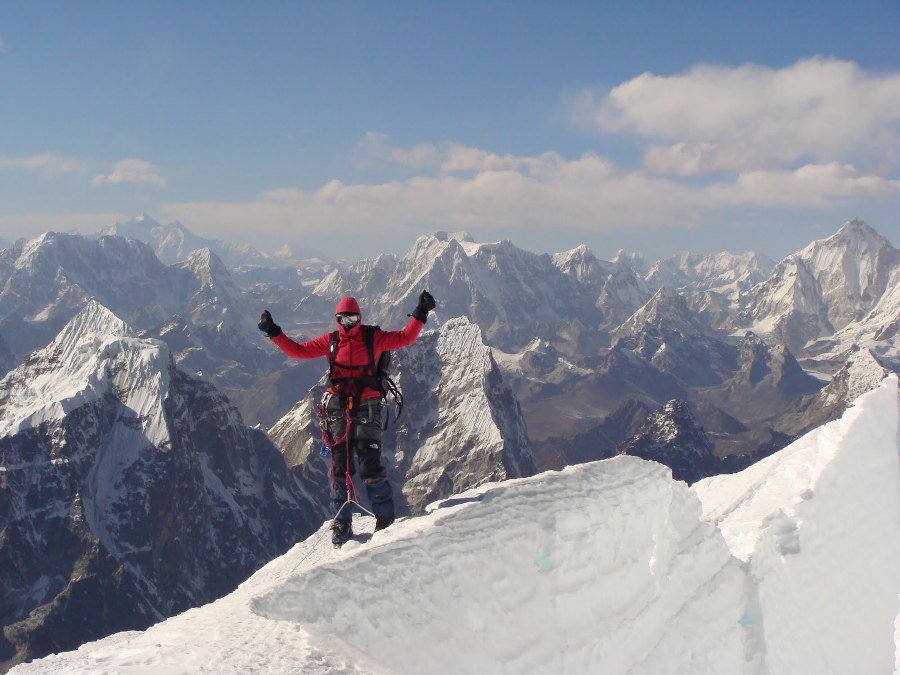