This virus is telling us that it is time for Eagle and Condor, mind and heart, to soar together

Because I believe that if we all unite under one roof, in respect, with the same values, if we all start to spread our love and beauty, and offer the world our talents and gifts, we'll have an immense impact on human kind and our whole planet!... Because our world IS love, so let's BE love... like an avalanche.
• May 12, 2020May 12, 2020 •

The Eagle and Condor Prophecy and the Virus

The Prophecy of the Eagle and Condor probably began more than two thousand years ago. It says: “Back in the mists of history, human societies took two routes. The Eagle peoples flew the path of the mind, of science, technology, and industry. The Condor peoples flew the path of the heart, of passion, intuition, and spiritual connections with nature.” It goes on to explain that for centuries they would never meet. Then in the Fourth Pachacuti (in Quichua, the language of the Andes, a five hundred– year interval), which began in about 1500 AD on our calendar, their paths would cross; the Eagle would nearly drive the Condor into extinction. But not quite. The prophecy says that five hundred years later, at the beginning of the Fifth Pachacuti—now—the opportunity arises for the Eagle and the Condor to fly together, to mate, and to produce a new offspring, higher consciousness.

History confirms the first prophecy. Columbus, 1492. The Eagle swept into Condor territory and almost wiped out the Indigenous peoples. But not quite.

Now, five hundred years later the prophecy is being fulfilled again. The Eagle and Condor are coming together to create higher consciousness. It is happening! Indigenous teachers have invited us to learn their ways. There is a deep interest in traditional nature-based wisdom and shamanism among industrialized people around the world.

The coronavirus is giving us a new perspective and a new opportunity to fulfill the Prophecy of the Eagle and Condor. Many Eagle people, including scientists, politicians, and business leaders emphasize that medical technology will prevail; we will find a vaccine to prevent future outbreaks; human ingenuity will dominate nature; and we will return to “business as usual.” Many Condor people maintain that Pachamama is sending a strong message that we must make radical changes in the ways we live, govern ourselves, and conduct business; we are being shown that “business as usual” is ultimately self-destructive; and we must move into a “new normal.”

The good news is that more and more of us who have spent most of our lives predominantly either as Eagles or as Condors are now spreading our wings to soar together. As I talk to people – virtually – and participate in on-line events, I hear over and over that this virus is telling us to reexamine who we are as individuals and as a species. The message that the hurricanes, earthquakes, fires, and other “once in one hundred years” events that now happen every year or so failed to convey is now being heard around the globe – because of the coronavirus.

We once took satisfaction in knowing that if we survived the hurricane, earthquake or other catastrophe, within a week or two help would arrive from the “outside” world: bottled water, food, medical help. Now we know: There is no “outside” world.

People everywhere have come to understand that our future survival as a species – at least in a world we would recognize – depends on combining the rationality of the mind with the intuition of the heart. They recognize that science only has some of the answers and that our willingness to listen to the messages of nature takes us to the other answers. Both are essential. Our successful navigation into the future depends on balance; we simply must honor both, our Eagle and our Condor aspects.

We humans may see ourselves as belonging to one nation or another, but in the final analysis we are all citizens of this Living Earth.

This virus is telling us that it is time for Eagle and Condor, mind and heart, to soar together, to mate, and to produce a new offspring: higher consciousness.

The prophecy of the Q'Eros, the native elders of the Andes 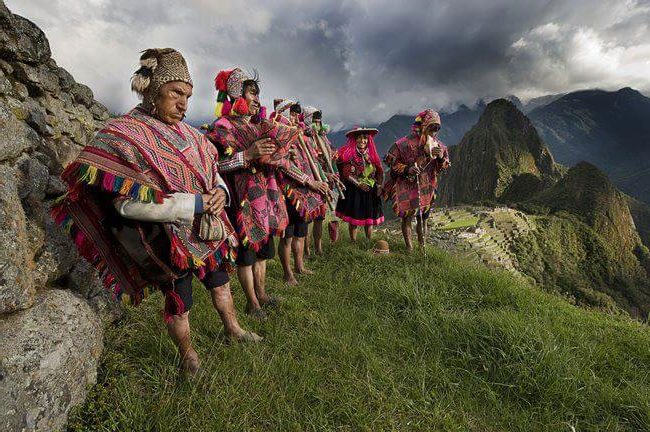